In the Streets of New York City 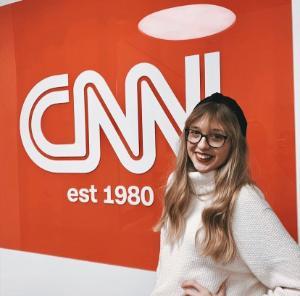 Megan Wordell is a third-year student majoring in Journalism and Political Science & Government and minoring in Innovation. In the fall semester of 2019, Megan worked at CNN as a New York City Booking Intern in the company headquarters. Before temporarily moving to the big apple, Megan worked as a Florida Recount Site Lead for the Democratic Legislative Campaign Committee, a Field & Campus Organizer for Kayser Enneking for State Senate District 8 campaign, a Deputy Campaign Manager for Amol Jethwani for Florida House District 21 campaign, and finally as a Content Creator for UnMazed Magazine. She is an aspiring political analyst, self-proclaimed over-thinker, and has a passion for politics, press, and punctuation.

Hey, Gator Innovators! An aspiring political analyst and present-day over-thinker of everything, my name is Megan Wordell, and I’m a junior at the University of Florida studying Political Science and journalism with a minor in Innovation.

I spent last fall semester as a CNN New York City Booking Intern, which is a fancy term for story pitcher, ultimate guest researcher, and sometimes even coffee-deliverer for your favorite nightly news hosts. It was my absolute dream job in my absolute dream city.

Getting to live and work in Manhattan for a semester was incredible on its own, but working at CNN -- during the most chaotic political atmosphere since Watergate — made me speechless every day. And by speechless, I mean, here we are, two months later, and I still won’t shut up about my obsession with CNN’s newsroom and the incredible lattes on the 17th floor.

I learned something new every day, whether it was the difference between an uptown train and a downtown train or the number of Emmy Awards Anderson Cooper has propped on his office desk. Here are a few of my favorite lifelong lessons:

1. Apply for opportunities like your future depends on it...because it could.

Internships can have huge impacts on your future career moves. They can show you what fields you might be interested in, and just as importantly, those you might not enjoy as much. While I genuinely appreciated my sophomore year political campaign job, I

learned that it wasn’t something I wanted to do in the long run. It led me to seriously question where exactly I wanted to apply this year and what I wanted to do with the rest of my life *cue dramatic music.*

2. It’s not a rejection, it’s a redirection.

Ultimately, I applied to internships that sounded interesting and fun. I applied to 18 positions in total (with the excel spreadsheet to prove it) and only heard back from a few.

I would love to say my hiring process was picture-perfect, with color-coded notes, a pre-interview meditation session, and a venti iced coffee in hand. In fact, it was quite literally the opposite. For months I hadn’t heard back from anyone at ANY of the 18 internships I had applied to; a last-minute interview opportunity led me to a phone call with my future manager on my lunch break, whom I called from my lovely Subaru Forester parked in the Reitz Union Garage. It was completely thrown together, but I spoke from the heart. Two weeks later I packed my bags and headed to the Jacksonville airport.

Once settled in my tiny Upper East Side Apartment, I conquered the daily tasks of living in New York -- did y'all know it SNOWS there in NOVEMBER?! Crazy.

3. Take yourself out of your comfort zone.

As the months went on, I continuously kept thinking “how on earth is this my life right now?” I realized that the more you put yourself out there, the better things can be. My favorite show “The West Wing” has this quote that says “decisions are made by those who show up.” I couldn’t agree with that more.

I volunteered my heart out. When my bosses needed someone to hail a cab and head uptown to grab an extra book copy for tomorrow's 3 a.m. broadcast of “New Day”? I was their girl. If they needed someone to do in-depth social media research on all 5,000 presidential candidates? I’m a Gen Z-er, I was made for this.

These opportunities led to more and more learning and growing experiences that have impacted me in ways I couldn't have even imagined. I’m more energized, motivated, and ready to take the world of political journalism by storm and seek to write stories that impact others.

They say anything can happen in a New York minute, but they definitely weren’t talking about the arrival time of the Q train on a Saturday night. But I never really minded waiting. I didn’t mind soaking in Manhattan’s magic for just another minute. And sure, when I was sprinting down 6th Avenue, on a last-minute run before Erin Burnett’s broadcast, the wind blew my hair into my eyes and I probably looked like an overwhelmed, business casual mess in 4-inch heels with 11 giant books in hand. Nevertheless, I couldn't help but smile because I was in New York City, in a city where if you can make it there you can make it anywhere.

Besides, anywhere seems overrated; lower Manhattan is just fine by me.