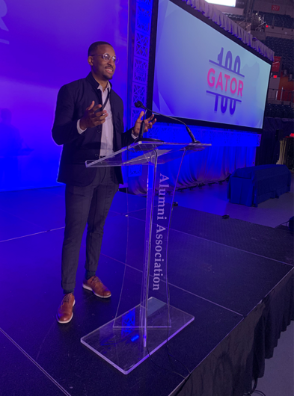 Ryan Widgeon is a senior majoring in Computer Science Engineering and Mathematics and minoring in Innovation. He is the CEO and Founder of two Gainesville startups – BL!NK and Ghost Development. With teammate Siddha Tiwari, Widgeon competed in the Big Idea Gator Business Plan Competition, in which BL!NK won the $1000 Social Impact Award. Widgeon previously worked at L3Harris Technologies as a Software Engineer/Systems Intern, at Google as an Engineering Practicum Intern, and will join Facebook as a Software Engineer this fall.

BL!NK is a start-up company that solves the ambiguity of high electric bills through transparency and home automation. The company uses both hardware and software to interface into your home electricity allowing you to real-time track and control your energy usage.

I grew up in a seven-person household. My dad was the only one who brought in income for the family; he was in the military, so it was less than $18,000 a year which – for seven people – it’s a struggle. He was able to balance that with the family, but I was always wondering how I could help in different ways. Eventually, when I started working, I was able to do that. I was an electrician throughout high school, I worked a few jobs, I worked at Publix, I worked at Plato’s Closet.

When I was an electrician (mostly on the weekends), I thought of different ideas of how to optimize energy usage. I went on to my Freshman year of college, I thought, ‘Okay, so – I’m doing Engineering now, so I have a better outlet to flesh out these ideas.’ I thought about how I could help people save money on their electric bill, [which] makes up about a ninth of everyone’s total bills, and that’s a pretty big chunk. So I decided to try and figure it out: I started prototyping ideas, and that’s when I came up with BL!NK.

BL!NK is a device that pairs with a phone application that allows you to real-time track your home energy spending and control it at the same time. You can see how much energy each individual device takes up in your house, and how you can counteract those charges and spending.

Why did you decide to enter into the Big Idea Competition, and what was that like?

I entered last year and got into the Sweet 16, and was encouraged to do it again, so I did. But I originally did it because hardware companies are very expensive, especially when it comes to startups. They’re very heavy in the capital side, so they need a lot of capital to build them up quickly.

Most entrepreneurs know that competitions and grants are free money. It’s better to take free money than investments. So, that’s what I’ve been trying to do – take as much free money as I can before I take too many investments.

What do you see in your future? After graduation, what do you hope to do?

I’ll probably work for a bigger company, maybe Facebook or somewhere else, hopefully in the start-up space. I’ll do that for a year or two, and then completely go full-time with whatever start-up I pivot to, whether it’s BL!NK or another start-up that I think can be successful.

What advice would you give to students hoping to start their own start-up, and become entrepreneurs?

Always think about the problem first and the solution last. Your biggest and most priced information source is always going to be your customer, so your customers come first. All the market research – researching and figuring out what they want – [is important] because your idea might be great, but it could only be your problem. Really figuring out what the broad problem is and trying to tackle it is key.

A lot of people throw that word [Entrepreneur] very loosely. I would say that if you have a project that you’re working on that you’re passionate about, and you’re prototyping this idea and trying to bring it to fruition, then take it step-by-step. Don’t try to rush anything, because it’s all going to come to you. Make as many connections as you can on the way – Your network is half of the reason why start-ups succeed.

I’ve been doing entrepreneurial stuff since I was 13. It’s always better to work for yourself, than to work for somebody else, especially when it comes to your own, personal goals. There’s a quote that’s like, ‘either you spend 40 hours a week building somebody else’s dream, or you spend 40 hours a week building yours.’ And that’s how I live my life.